Do’s and Don’ts on the Yellow Chief. Part 1

So, if we take all present Indian rides there are millions of kilometres of knowledge and experience available about how to take care of your Indian. Some is forgotten, some is new and some of the info is heard from someone who heard it… 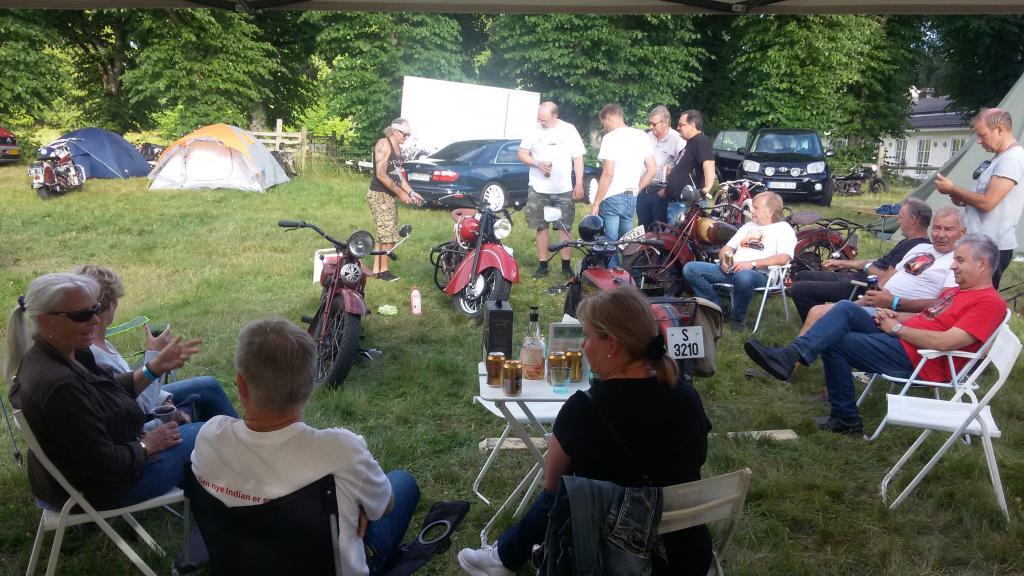 Lately I have had some discussions with other Indian riders about go fast parts, oldstyle modifications and new triks to make them run fast for a long time. Some may think that we need some kind of woodo or secrets done to our Indians to make them go faster and last longer than expected but I don’t think so. It’s just about understanding of what we are dealing with, the use of the right materials and it must be mechanical correct.

That is three things listed, and I believe that if one of them are wrong the Indian will not perform right or even break down.

When I say “understanding what we are dealing with” I think about the rider. He or she must understand what that they are doing and why.
Like does my Indian run rich, lean and how to fix it. Why is there a manual ignition advance on my Indian and what to do with it? The feel of the Indian, vibrations and temperatures, what happens, why? Can I expect that my old Indian handles what I am doing to it the way it is built or rebuilt?

When talking about using the “right materials” I think about oils, bearings, pistonrings, brakelinings, electric cabels, tyres everything like that, And maybe the old stuff is best and sometimes new materials are even better.

And regarding “Mechanical correct” I think about clearances, balancing, accuracy and tolerances.

So, in simple terms, if its well-built with the right parts and the rider know what he is doing the Indian is one of the greatest bikes you can own. It will run good for its age and last forever. 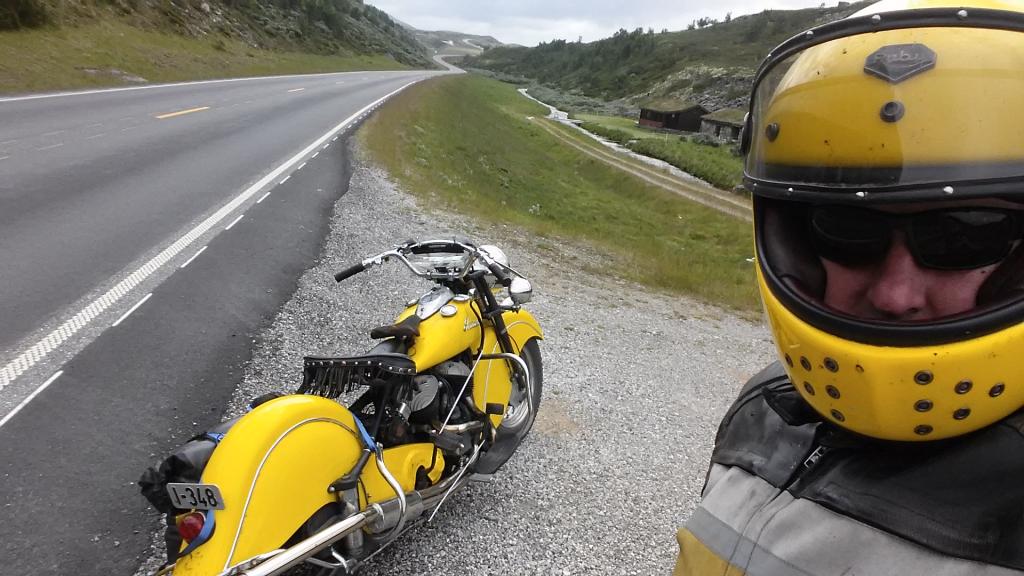 Some people is very thorough in keeping their Indian stock to keep history and technology preserved while some are constantly seeking new ways and ideas to get to the rally faster and better than others. Since I have a really big interest in race engines and such in general I have had a tendency to be that later type described here, seeking new and hopefully better ways. And sometime this is not necessary well taken by the purists but I believe that using all knowledge, old and new we can make both the plain stock Indians and the modified ones run at their best.

So I want to tell you what I have done to my Indian and why.

Well, a single grade mineral 50 oil are like old oils for old engines. And the viscosity test has been performed and described only at 100 degree Celsius. And it may as well be non-detergent.
This is because before the 1950’s engines were often lacking oil filters and the oil was blended so it would not pick so much pollution form combustion and wear. This way the oil would stay clean and nice. The pollution would sink to the bottom of your sump overnight and in your maintenance manual it was written that you sometimes should flush and clean your sump with fuel or similar to get the black mud out of the engine.

But today the engines have an oil filter so modern oils are made detergent. This means they pick up most pollutions good, they wash the inside of the engine constant and carries the black stuff around in hope of finding an oil filter to get rid of it. This way the new detergent oils become black faster and people may think it’s a lousy oil even if it actually did one of its jobs real good. And in the night it actually keeps its blackness and particles in the oil instead of sinking it to the bottom to an extent. You may think that is a problem because you don’t have a oil filter, but actually its not a problem because on your Indian you change the engine oil so often anyway. I suspect not many Indian riders ride much more than 3000 to 5000 km a season anyway and a modern oil can handle that much better than an old style oil anyway.

What about your modern car, what is your oil change intervals…? Maybe 15000km? And you will not be ruined by oil changes on your Indian as the tank is not so large. I call all my expenses on my Indian “my favourite waste of money”, great! And by the way, if you ask a petroleum engineer what is the optimum operating temperature of an engine oil he will say 100-110 degrees Celsius. So to make that happened you must not fill you oil tank full, I who live in Norway often ride in 10-15 degree weather. So I have about 1 to 1.5 litre of oil in there (half full) then I may get some heat into my oil. Then the oil lubricates at its best. Check you oil temp with a thermometer next time if you want to know, don’t judge oil temp by the damp rising from your oil tank, its not because its boiling. Some say that their oil is so hot that their fuel boils in the fuel tank. Nah, don’t believe it. If your fuel boils I think it may be in your carburettor bowl or your motor is running way to hot because of something else. I have insulated oil lines on my Chief to avoid cool oil and even riding at autoroutes in 30 degree weather and stopping at the toll stations the fuel don’t boil so..
And let’s say you have trouble getting the oil temp up. And you use single grade 50 oil. Then you actually don’t know what viscosity your oil has. Because the single grade oils with just one number is only tested at 100degree Celsius. What the viscosity is at zero degrees is not considered.

A multigrade oil on the other hand has two numbers, the first one with and w behind the number. That describes the cold viscosity measured at 0 degrees, therefor the w = winter.  So a multigrade 10w-50 oil is just as thick as a singlegrade 50 oil at 100 degree. So if you where an fan of the 50 oil, why not use the 10w-50 as it is just as thick at the oil temp you was interested in.

If you care about the oil’s performane below 100 degree you should start using a multigrade instead. See the sketch, at which direction your oil viscosity takes below 100 degree you don’t know with your singlegrade oil, see brown and green lines in the sketch. And if your oil is always between cold and 70 degree your should care about it. An singlegrade 50 oil has a viscosity at zero degrees, you just dont know what it is. So why not use an 5w-50   10w-50  15w-50 or an 20w-50 ? 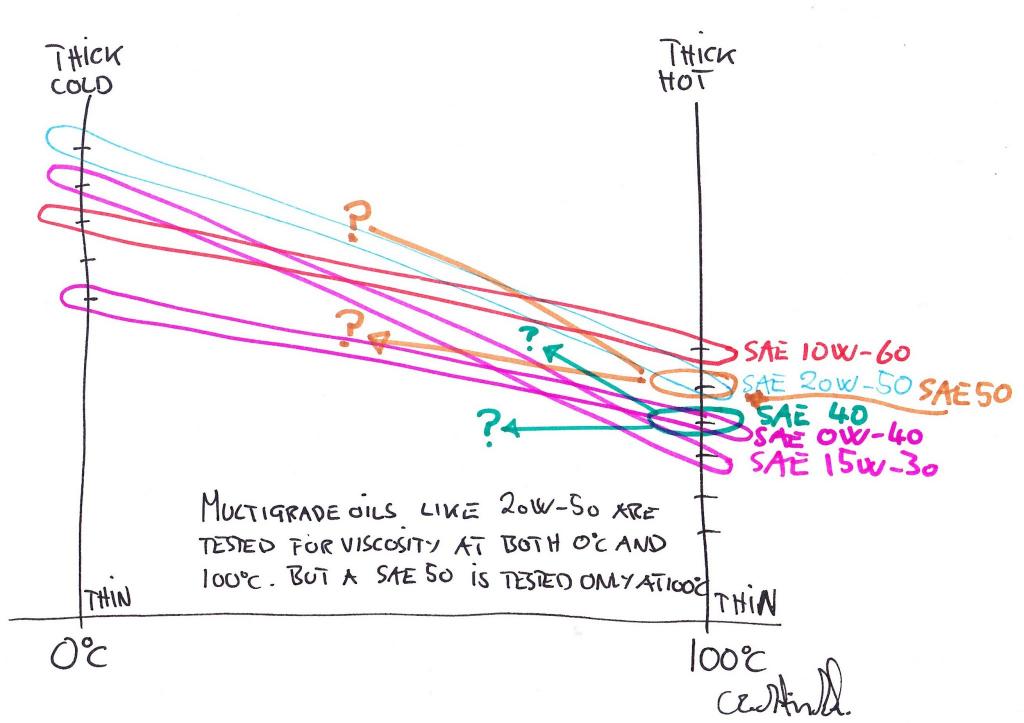 Remember, this is my experienses, around my needs. If you have other needs and solutions that work for you it is great. This is just to let you know what I mean. If you do not have any opinions and are looking for info you are welcome to use this to deside what to do.