Sometimes you hear vintage mc motorcyclists discuss “go fast” mods to be able to follow modern traffic, or sometimes just to brag about technical knowledge. When it comes to camshafts they sometime say that this cam pulled better from the bottom or the bike managed 110 up that hill with full weekend package on the luggage carrier. And then there are some who discuss valvelift and duration, that is technical description of the camshaft. And here comes some more on that.

To be able to know the technical spesifications and actually know what we are talking about when it comes to camshafts for Chief’s I bought the 4 most common profiles and did a full measurement job. This is the only way get to know real spesifications and then we will be able to compare them to camshafts from other motorcycle brands and catalogs. But regarding comparing cams, you must know how the data is measured, this is very important when talking about duration. Duration is a number witch describe how many degrees the crankshaft rotates while the valve is open. Some measure the amount of degrees the crank rotates from the valve leave the valveseat and lands on the seat again, some measure from the point you have reached 0.1mm valvelift and down to 0.1mm lift again. Then we have standards that say 1mm or even 0.050″ witch is 1.27mm. The Americans often measure duration at 0.050″ valvelift but if they say Advertised duration they have measured it at 0.003″ lift. It is pretty clear that if you look at a graph describing the valvelift the duration is much longer at Advertised duration than if you measure at 0.050″ lift. Then we understand that we cannot take one duration figure and compare it with another cam that could be measured at another lift and direct say witch cam has the longest duration. Even some measure the duration with the valve clearance correct and some measure with zero clearance. Now we understand that duration figures are pretty worthless if we dont know how it is measured and we cannot use them to compare and discuss cams. 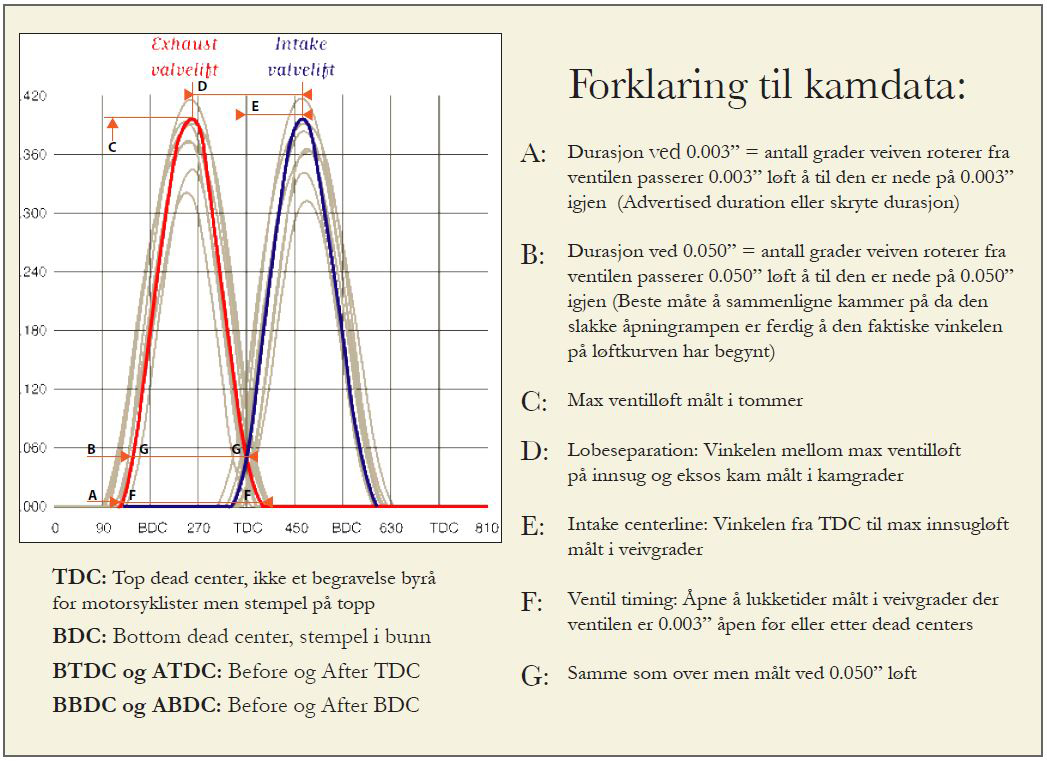 In the figure above you see an example of an valvelift graph with some text (in Norwegian). In the graph you see the red lift curve of the exhaustvalve and the blue line is the liftcurve of the intake valve. The bottom, horisontal line describes the crank rotation in degrees and the vertical line is valvelift in  inches. TDC and BDC describes the piston position and is short for Top Dead Center and Bottom Dead Center In this article I have listed the most common camshaft data so you can do a good co mparison against forexample Harley Davisdon cams. And in addition I have included a calculated value called Dynamic comression ratio. That is the compression ratio the cylinder and piston will produce after the inlet valve is closed in the compression stroke. You normally say that an engine had like 9-1 comp ratio. But that describes the cylinder volume + combustion chamber volume divided on the combustion chamber volume. But actually when the engine is running the whole cylindervoume will never be trapped and used in the compression stroke because the inlet valve closes after BDC and the piston is way up in the bore before the sylindervolume is trapped for compression. In the graphs you see that a hotter cam with longer duration closes the inlet valve later in the compression stroke and therefor you loose some dynamic compression ratio. To understand the effect of this I have listed the calculated dynamic compression ratio for you to see. I assume the static comp ratio is 6.5-1 witch i think is about right for an standard 1200 Chief. If you look at this you will understand that when you install hotter cams and increase the comression ratio you will noe gett higher comression ratio. You will actually just avoid looseing dynamic compression compared to what you had with std cams. If not you will loose dynamic comp by installing hotter cams. So if you build a Chief for your 55kilo daughter is can be smart to install a cam that closes the intake valve late so she will be able to kick down the kickstarter. In the graphs I have included all the lift curves as a light brown line behind the actual liftcurve so you can see how the cam looks compared to the others.  You can see that all the cams are measured with both standard and Bonneville lifters. This does something with the lobeseparation, valvelift and also duration because the Bonne lifter has a different geometry. The lobeseparation is the main effect on the Bonne lifters. You can combine different lifters in and out in a Chief engine if you want.

The measurements has been done with a digital indicator directly on the valve and an degree wheel was mounted on the crankshaft primary sprocket. Valveclerance was set to zero and crank was rotated in 5 degree step for each lift measurement. These mesurements was then input into a Cam Analyzer software and an valveclerance of 0.005″ on the inlet and 0.007″ on exhaust was added in the software before the graphs and data was calculated. If you understand this you know a lot more than those who dont. The eternal question of witch cam to choose will not be foud from these data alone. Then you must start a discussion about how are you going to use your bike, what other modifications will you do and how willing are you to do a lot of work sorting out your carburettor, ignition and gearing to make your cam choise work. On my Chief I have tested thestd cams with std lifters, Schunk with std lifters and now I run Bonneville cams with Bonneville lifters. Something I founs interesting is that the 2000 modell Husaberg 650 in Motard version has exactly the same camdata as a Chief with Ollie cams and std lifters. But that is a combo I have not tested, yet. 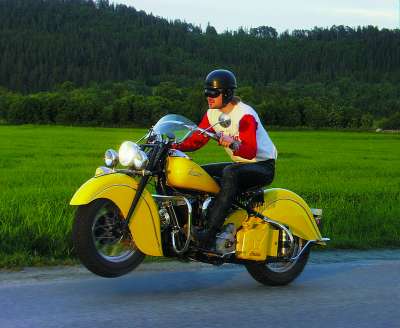 If we find a 60 year old camprofile with a reputation or an name from an old hero on it, it is not certaion that we will be equally legendary if we just install that cam. I think that those who made tuning cams in the old days knew what they where doing and tested a lot. They may not just mounted that cam and a thinner headgasket and by that managed to throw the gravel higher and longer.No, I think they where pretty serious with their modifications and did a lot with manifoilds in and out, fuels, carbs, ignition and drive ratio. 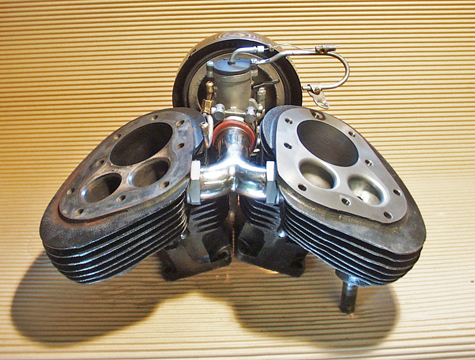 Maybe the whole point in their tuning job was to win a certain hillclimb. So I beleive it is way suffisient to mount a factory sport cam that was made for the std setup, not a race cam. My opinion is that the Bonneville setup is pretty good. If you optimise the carb and ignition with that moderate sport cam you will have a happy motorcycle.   Ole Martin Mobeck
Tweet